CAPTURING THE EMPTY STREETS OF LONDON AMIDST A PANDEMIC

Every shoot has some sort of limits. Shooting during the coronavirus pandemic is even more restricted. According to UK government rules,?I’m allowed out for an hour so I bundled shooting, my exercise and shopping all into my given hour. I left the house at 4.30am. I live in?central London and I’m a demon cyclist.

Suddenly stripped of its usual hustle and bustle, cars and trucks, and the constant foot traffic of locals and tourists alike,?Simon Norfolk unearthed a new side of?London?with the X1D II. Getting lost in the sharp lines and curves of the buildings that are usually concealed by the city’s?hyperactivity,?all its glorious architecture shone forth like never before. The only faces Simon met were those of the bronze sculptures of England’s past. The only sounds he heard in the normally busy?Piccadilly Circus were the songs of blackbirds.

Below are Simon Norfolk's captures around an empty London accompanied by his own personal comments about each location's past and their historical ties to previous plagues and afflictions. 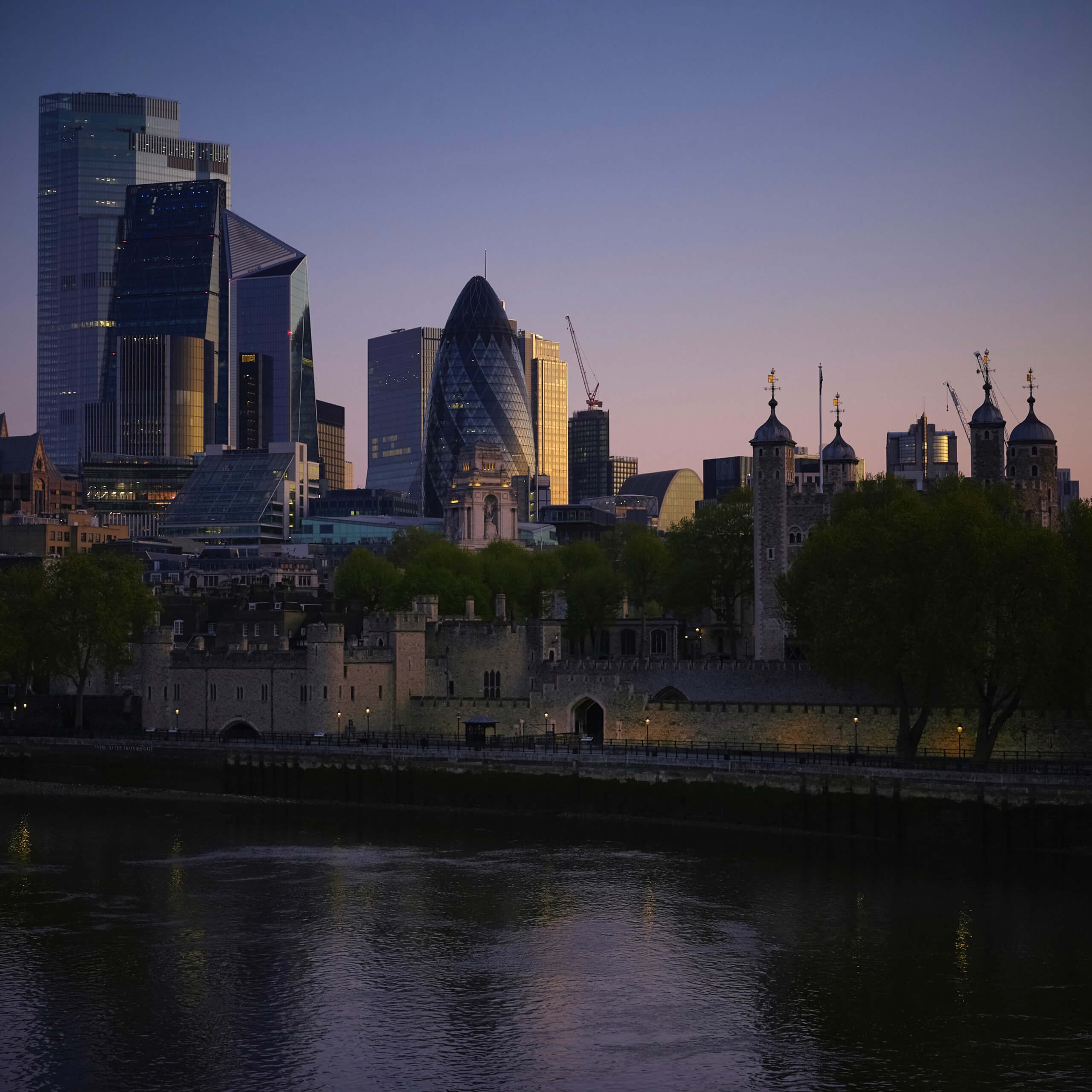 The River Thames from London Bridge downriver is called the Pool of London and until about 1800 was a teeming forest of ships discharging cargo right adjacent to the city's streets. The Pool was almost silent during the plague epidemic of 1665, shipping attempting to enter was quarantined far down the estuary at Canvey Island. The term ‘quarantena’ comes from the 15th century Venetian for ‘forty days,’ being the period ships were held offshore for fear they were carrying the Black Death. Punishment could be harsh. In 1721 two vessels carrying cotton goods from Cyprus, then affected by the plague, were simply ordered to be burned along with their entire cargoes. Despite the roughness of these measures the viruses were poorly understood. The disinfection procedure for many suspected diseases was to open the hatches of ships and expose the cargo to the morning dew. Little wonder the history of London is the history of countless epidemics. 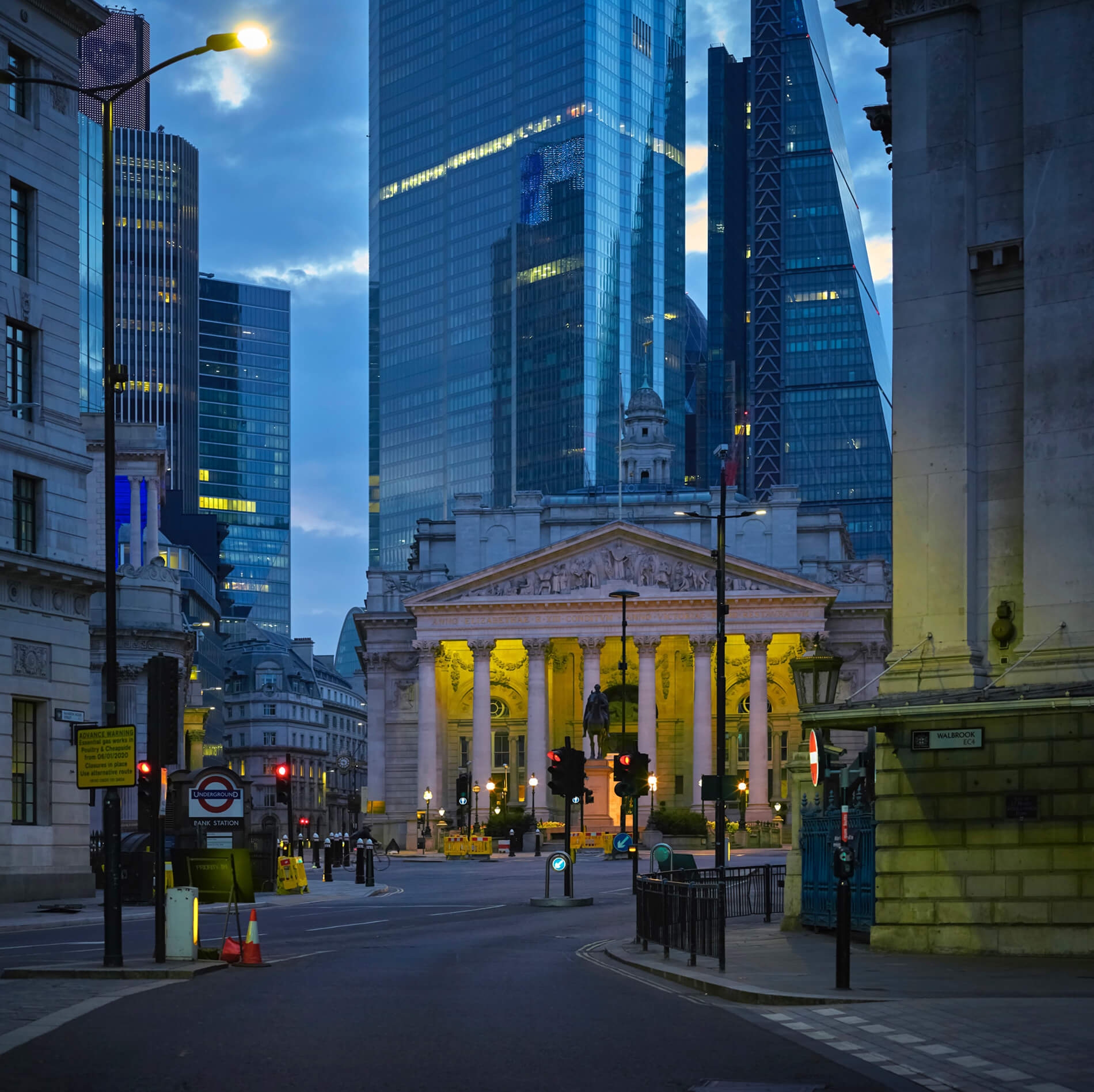 The Royal Exchange is the heart of the financial district of London called simply The City. Founded in 1571, it was the main marketplace for traders in every commodity although for a century or so the new ‘stockbrokers’ were excluded for their juvenile and uncouth behaviour. During the Great Plague of 1665, where the disease was thought to transmit through ‘miasmas,’ huge bonfires were lit at The Exchange’s doors to draw out the diseased air and dump it, presumably, onto the street and its pedestrians. 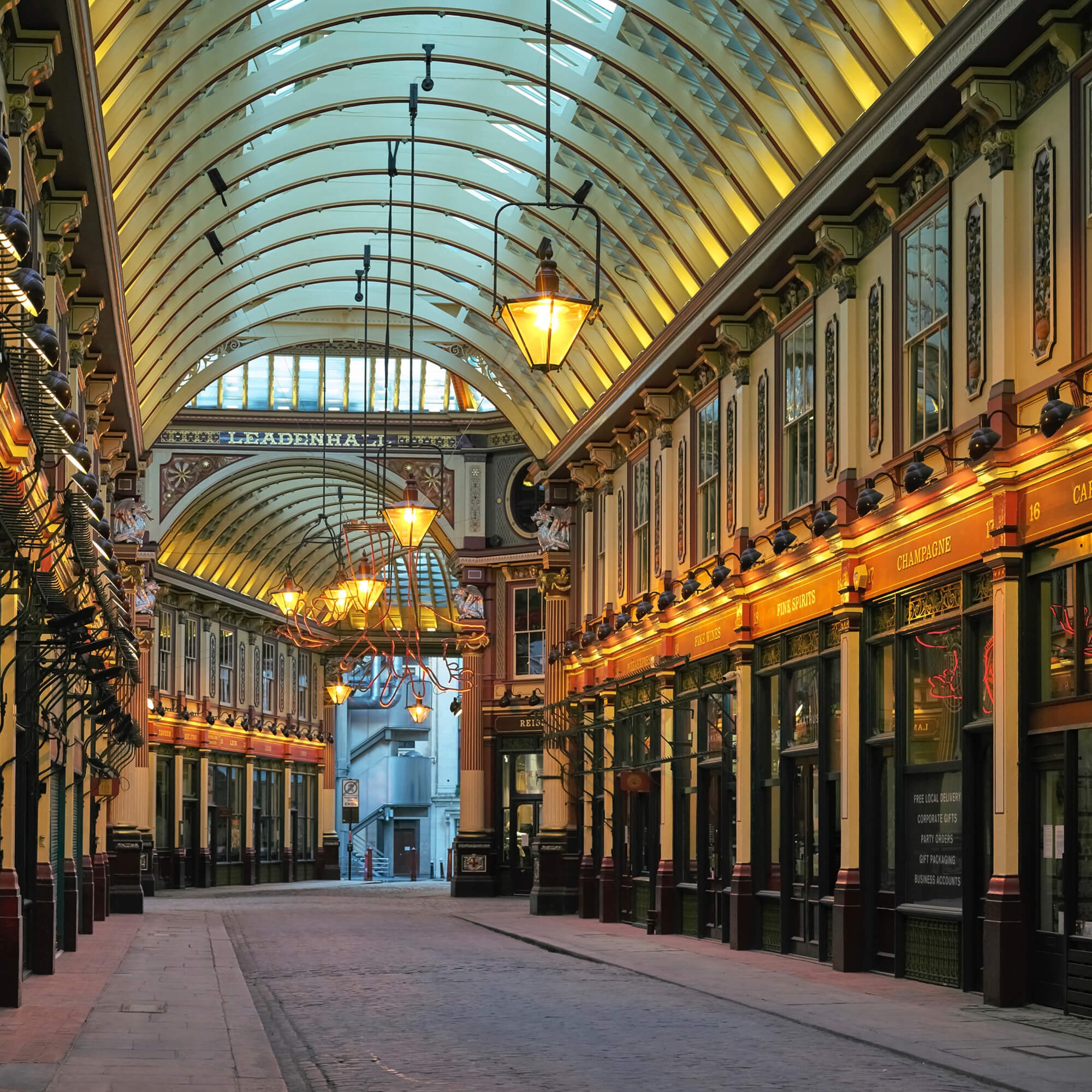 Leadenhall Market is one of the oldest in London, dating from the 14th century standing on what was the centre of Roman London. The current structure, with an ornate roof and cobbled floors, was designed by Sir Horace Jones in 1881 but it has always been primarily a poultry and game market. During the Great Plague of 1665 a popular ‘cure’ was to take a live chicken and hold its plucked bottom to the swollen lymph nodes and keep it there. If the chicken fell ill, one would wash it and repeat the process until nursed to full health. Pointless for the patient and undignified for the chicken, it passed the time whilst you waited to die. 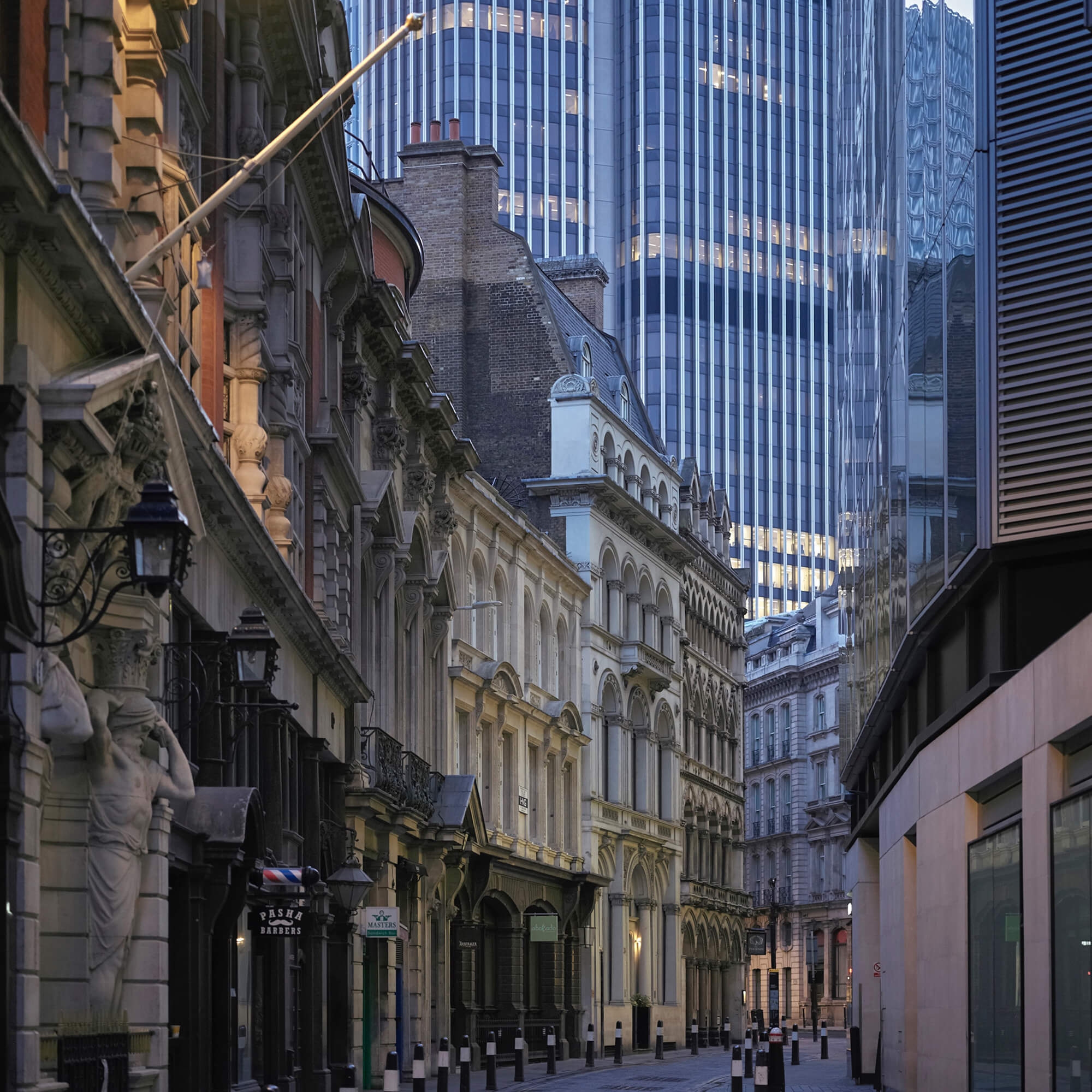 Sir Christopher Wren proposed a new city layout after the Great Fire of 1666 worthy of a grand colonial power featuring rond-point piazzas and broad, radiating boulevards. The plan was never realised, there was just too much vested property interest, and the City of London to this day keeps much of its medieval street layout. Which means it keeps many of its beautiful, ancient street names. Listed they read like a kind of poetry: 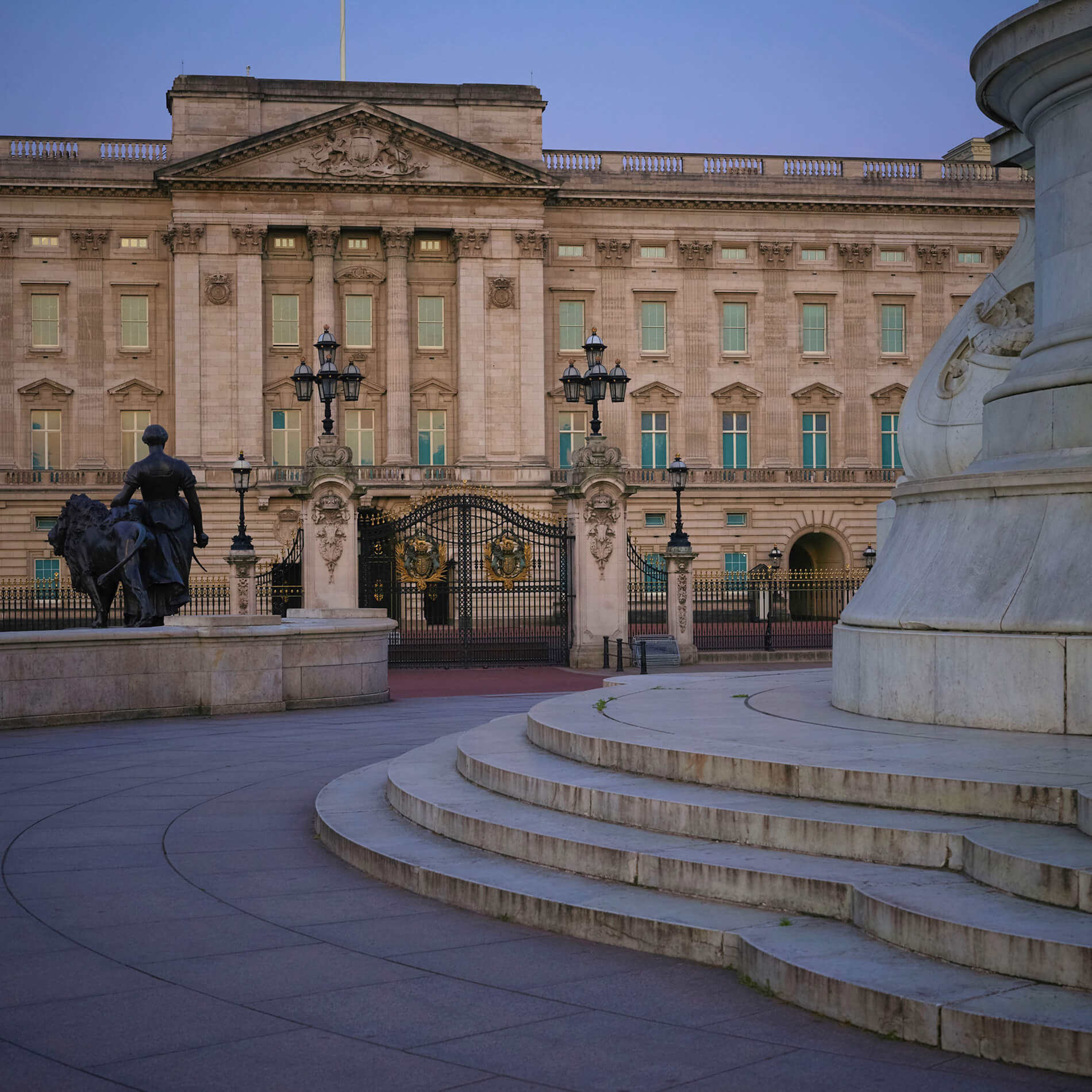 They’re not even changing the guard at Buckingham Palace during coronavirus. It might not matter. In 1982 a serial burglar Michael Fagin easily broke into the Palace through an open rooflight, wandered some of the 775 rooms getting drunk on wine he found and finally, laughably, entered the Queen’s bedroom unnoticed during a shift change between the armed security at the door. The Queen fled and Fagin was finally cornered by a footman whose main job was walking the Royal corgis. He was arrested and sent to a psychiatric prison but only charged with the theft of the wine. Bizarrely, breaking into the home of Queen Elizabeth ‘by the Grace of God, of Great Britain, Ireland and the British Dominions beyond the Seas,’ was not actually made a criminal offence until 2007. 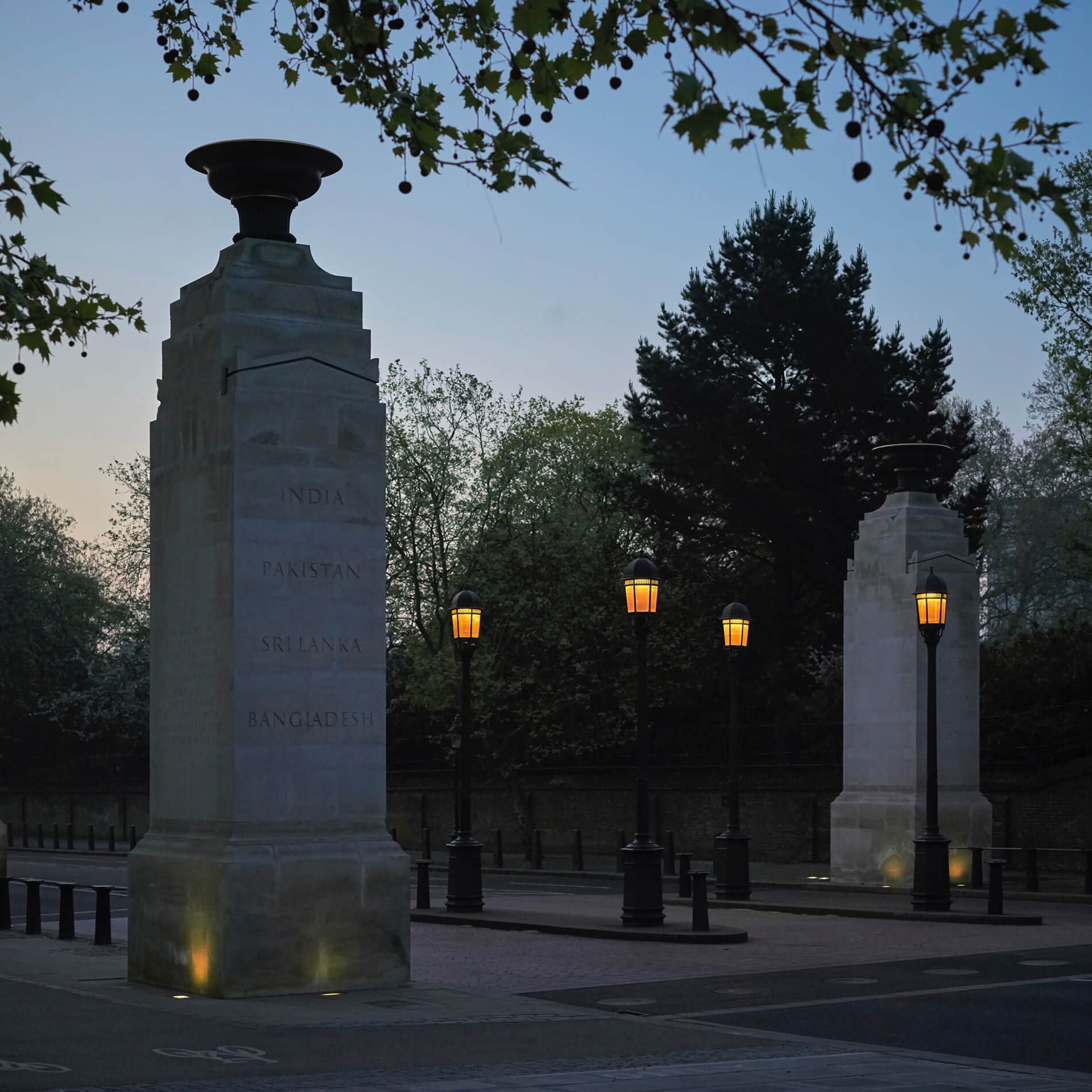 Located at Hyde Park Corner and Constitution Hill, the Commonwealth Memorial Gates commemorate the armed forces of the British Empire from Africa, the Caribbean and the Indian subcontinent. They were inaugurated by Queen Elizabeth II in 2002 to thank these nations for their service to Great Britain. At the other end of this grand Imperial way is a much older memorial, to the Royal Marines, that shows less grateful subjects of the British Empire being joyfully bayoneted. 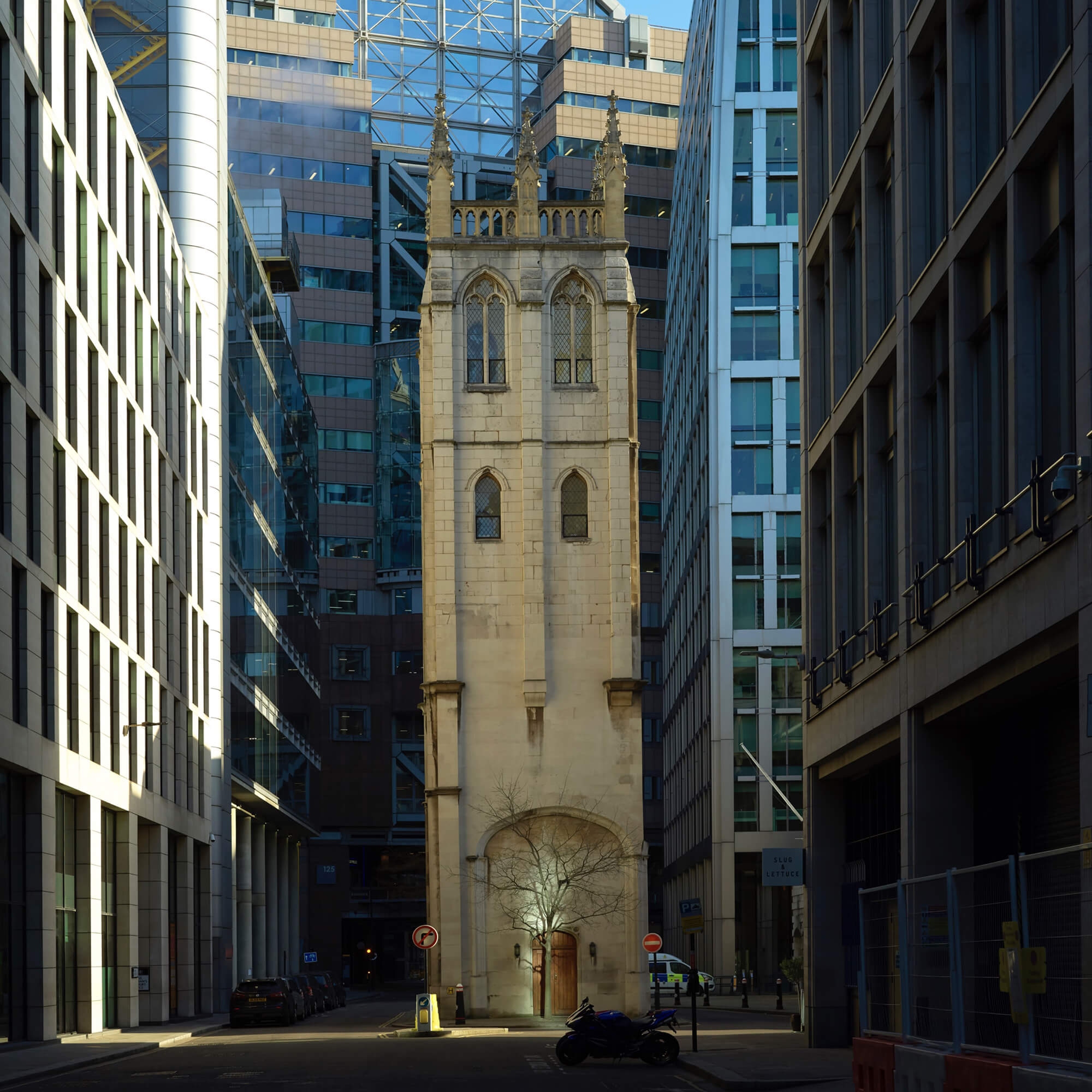 The Leaning Tower of London’s Love Lane Leans A Little To The Left: St Alban’s church in Wood Street on the corner of Love Lane, formerly a street of brothels. Who would have thought that a district of prostitutes was also a home to actors and their friends? Had it not been for local residents John Heminge and Henry Condell gathering together William Shakespeare’s papers after his death in 1616, a good half of the Bard’s work would have been lost to us. Three of Shakespeare’s darkest tragedies, Macbeth, King Lear, and Antony and Cleopatra were written under lockdown during the plague outbreak of 1605/6. 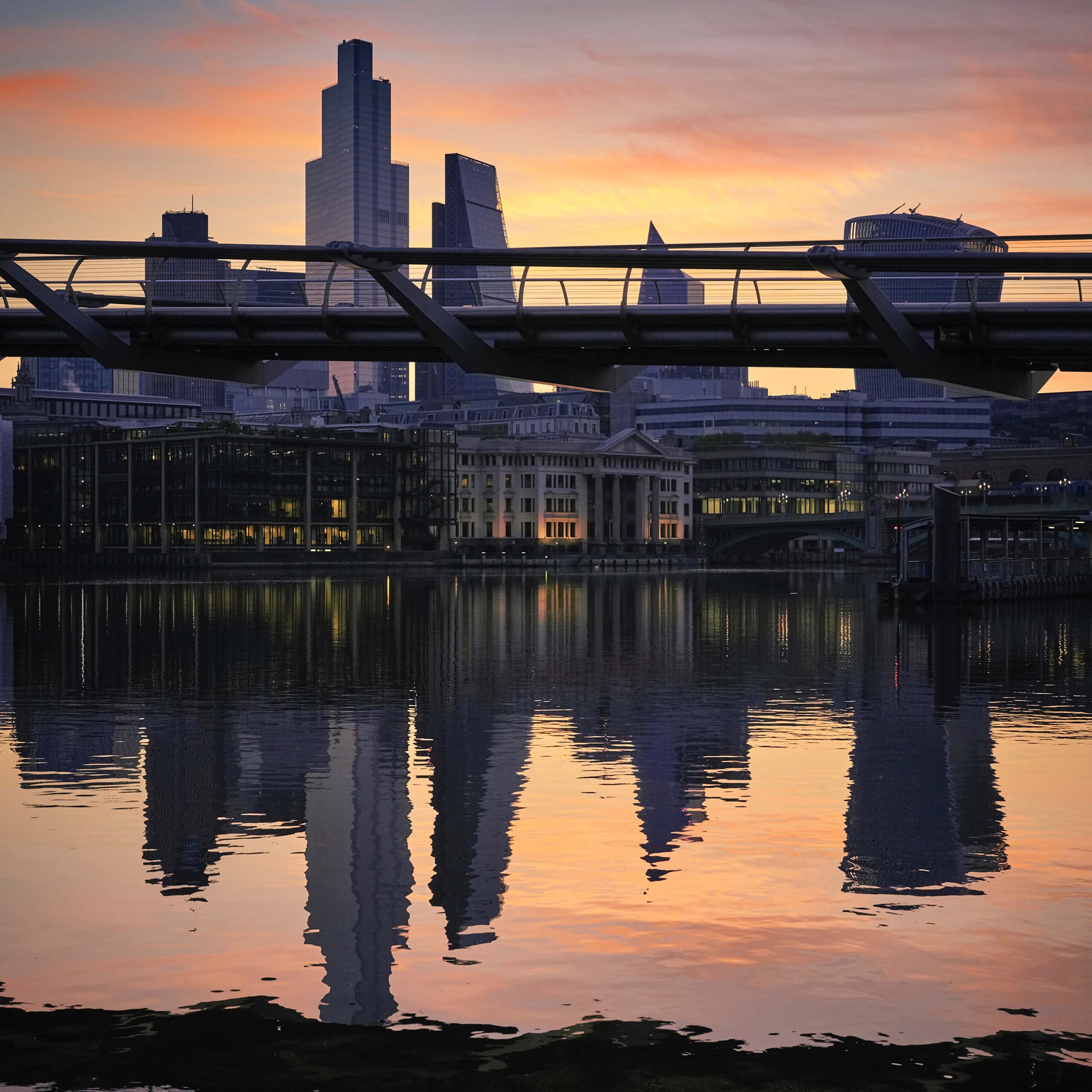 For most of London’s history its sewage was simply dumped into the River Thames but by the 1850s the system was becoming overwhelmed. The city at that time still enclosed many factories and slaughterhouses and the population was booming. The wealthy were gaily tugging away at their new flush toilets made famous by Thomas Crapper whilst the poor were using some 200,000 leaky and unreliable cess pits some of which had been built in the reign of Henry VIII. In the scorching hot summer of 1858, the system finally collapsed. ‘Impure matter’ coated the river’s foreshore to a depth of six feet. In the House of Commons, the curtains were soaked in lime chloride to suppress the stench and when a pleasure cruise for Queen Victoria was curtailed after a choking five minutes the press took to calling it ‘The Great Stink.’ The Illustrated London News lamented: ‘We can colonise the remotest ends of the earth; we can conquer India; we can spread our name and our fame to every part of the world, but we cannot clean the River Thames.’ It was not until a hugely expensive sewerage system was installed by the great engineer Joseph Bazalgette that Londoners were able to put away their perfumed handkerchiefs and carbolic soap and breathe freely.

The X1D II was terrific. All the pictures are shot handheld at the extreme end of the ISO range and just about the lowest shutterspeed I could use, sometimes using my bike as a brace. I’ve never needed mirrorless more. There was no time for a tripod and I couldn’t have carried it on the bike anyway. Autofocus was great even with lens wide open and noise is no problem at all.

Award-winning English photographer Simon Norfolk is most prominently known for his landscape work, which has been centered around the theme of “battlefield” in all its forms. This work has taken him to some of the world’s most troubled war zones and centers of refugee crises. See more of his work on his website or Instagram: @simonnorfolkstudio.

Reproducing some of Leonardo da Vinci’s early sketches as digital versions, the Department of Architecture at the University of Bologna used the H6D-400c Multi-Shot in combination with their own developed software to create 3D models of these art pieces that are hundreds of years old.

Family Portraits in a Time of Lockdown

Living in London, freelance photographer Stephen Sweeney is used to rushing around the metropolitan city on shoots. Now, for over a month, he has been confined to his home. In lockdown with his four brothers and his parents, he keeps his creative juices afloat by capturing beautifully lit portraits of his six family members with X1D II 50C.

Alicia Vikander, Kit Harington, and other Hollywood Faces on Hasselblad

Norwegian photographer P?l Hansen has photographed an immense list of actors, musicians, and other notable celebrities. With his reputation of making anyone feel at ease in front of his Hasselblad camera, P?l always comes away with a unique story of his own about how it is to photograph these star subjects.

Using the Hasselblad Multi-Shot system, Dominique Provost had the opportunity to photograph Spanish baroque sculptor Pedro de Mena’s collection of six hyper-realistic 17th century sculptures. These photographs will be of monumental importance for art conservation, future restoration, digitalization, and if necessary, reproduction of these historical pieces.

Narwhals, Icebergs, and the Extreme Landscapes of Greenland

Taking to the skies to capture Greenland from above, Roger Fishman created the largest fine art collection of the island’s extreme remote beauty, entitled?Ephemeral & Eternal: Greenland. Collaborating with scientists and hoping to activate the public, Roger’s photographs reveal what is at stake and what we must work to preserve for the future of our planet.

Portraits of the Incredible Craftspeople of Peru

Finding himself amidst the most incredible craftspeople from Lima to Cusco to Puno, Roman Jehanno traveled across Peru to capture stunning portraits of various artisans, farmers, bakers, and more. Roman’s Peruvian portraits captured with the H6D-100c help to preserve and spread cultural awareness about the lives and work of so many talented, hidden artists.

Fashion photographer Julien Tell, in-house photographer at Highsnobiety – the expert on all things trending within fashion, music, and entertainment – put the H6D-100c to use when shooting their latest collaboration with Versace, giving results that brought the vibrant clothing pieces and dynamically curated floral arrangements to life.

Hasselblad H System photographer Tom Oldham was one of the first in the world to put the new XCD 45P lens, the world’s lightest digital medium format autofocus lens on the market today, to the test in the low winter light of London.